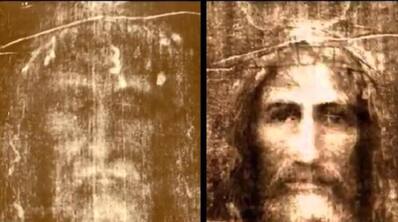 There are no recorded Images of Jesus and we do not worship any Idol or Image . On  the left is the Shroud of Turin
On the Right is a 3D generated Image of what Jesus possible would look like.
T

Jesus is The only true Holy Messiah

​The Greatest Man in HIStory...

HE never held any degrees ....yet he was a Teacher

HE had no servants and ....yet they called HIM Master

HE gave no medicine..... yet HE was a Healer

HE brought no trouble and was not guilty of anything .....yet they convicted HIM

He committed no crimes ...yet they crucified HIM

HE won no Military battles ....yet HE conquered the world

HIS words are of LOVE, and TRUTH ,AUTHORITY ...yet people deny HIM

All wars were fought with hatred and Murder...yet his was a war of LOVE ( for His Father and his People)

He Had no house , yet He prepared one for you

HE died and was Buried IN A TOMB ...yet he LIVES today

Jesus refers to God as “father” in his prayers

Jesus warns of Judgment and Hell

Jesus Exalts the Fathers Will

Jesus was hated and despised by many

​Jesus warns us of false signs and wonders.

Jesus had the power to control the weather

Jesus raised people from being dead

Jesus made the deaf hear

Jesus was worshipped as God


Jesus is the Son of GOD , A part of the Holy Trinity

The Savior of the World,

The King of Kings , Lord of Lords

The Alpha and The Omega

The Bread of Life

The Lord Of Glory

The Lord of All

The Light of the World

The Lamb Of God

The Way , The Truth and The Life

The Power and Wisdom

The Holy and The Righteous one

The Judge of the Living and The Dead

The True, Mighty , Everlasting God, who was and is , and is to come

Jesus was known to be a carpenter and this indicates that He not only grew up in the house of carpenter but He also worked there long enough for people to know Him as a carpenter.

The only accounts we have of Jesus  comes from the gospels, and John tells us that they only record a fraction of all Jesus did:“Jesus did many other things as well. If every one of them were written down, I suppose that even the whole world would not have room for the books that would be written” (John 21:25, New International Version).

Matthew’s gospel claims that Jesus’ conception was miraculous, and points to this miracle as a fulfillment of Isaiah's prophecy.
“Therefore the Lord himself will give you a sign: The virgin will conceive and give birth to a son, and will call him Immanuel” (Isaiah 7:14).
Not only was Jesus born to a virgin, but Matthew saw this as a critical piece of evidence that Jesus was actually the Messiah.

The name of the town where Jesus is born is called Bethlehem. In Hebrew, this is two words. Beth meaning “house,” and lehem which means “bread.” It’s hard not to see the significance here
Not only did the prophet Micah predict that the Messiah would be born in Bethlehem, but Jesus frequently referred to himself as the “Bread of Life” (John 6:35, 48, 51).


Numbers 4:3 tells us that a man must be at least 30 years old to hold the office of priest. Interestingly, this is about the age Jesus was when started His ministry:
“Now Jesus himself was about thirty years old when he began his ministry” (Luke 3:23).

Jesus’ ministry only lasted about 3.5 years


Jesus was not a vegetarian, The diet in Palestine for observant Jews was fairly universal. The gospels all show Jesus eating animal products, like most other Jews did. He would have eaten a regular diet of fish (Mt. 14:19) and would have enjoyed Lamb which was customary during Passover (Luke 22:15).

Only three people in the Bible fasted for 40 days: Moses, Elijah, and Jesus. Depending on how well one’s hydrated, severe starvation begins between 35–40 days. It was during Christ’s fast that the devil tempted Him in the desert (Mt. 4:1–11).


Jesus claimed to be God Since the beginning, the Christian church has considered Jesus to be God in the flesh. In one instance, Jesus called himself by the very name God used when he spoke to Moses from the burning bush (Ex. 3:14):“Very truly I tell you,” Jesus answered, “before Abraham was born, I am!” (John 8:58


JESUS IS LOVE, YES, BUT HE DIDN'T COMPROMISE WITH THE WORLD, AS MANY PEOPLE FALSELY ASSUME. WHEN JESUS PREACHED, HE PREACHED WITH BOLDNESS AND AUTHORITY.
JESUS REBUKED MANY PEOPLE, CALLING THEM A BROOD OF VIPERS, HYPOCRITES, SWINES, DOGS, SERPENTS, BLIND GUIDES, FOOLS, MURDERERS, WHITE WASHED TOMBS, AND CHILDREN OF THE DEVIL.

THE BIBLE TEACHES US IN THE GOSPELS, THAT WHEN JESUS PREACHED,
13 TIMES PEOPLE WERE MUCH OFFENDED AT HIS TEACHING,
AND ON A FEW OCCASIONS WANTED TO MURDER HIM.

JESUS OVERTURNED THE TABLES OF THE MONEY CHANGERS, AND DROVE THEM OUT
OF THE TEMPLE WITH A WHIP THAT HE HAD MADE WITH SMALL CORDS.

JESUS CURSED THREE WHOLE CITIES DURING HIS MINISTRY, AND TOLD ONE OF THEM THAT IT WILL BE BETTER FOR SODOM AND GOMORRAH ON THE DAY OF JUDGEMENT THAN FOR THAT CITY
.
AFTER PREACHING AN OFFENSIVE MESSAGE TO A LARGE GROUP OF FOLLOWERS ONE DAY, EVERYONE, EXCEPT THE 12 APOSTLES LEFT AND QUIT FOLLOWING HIM, FOR THEY WERE OFFENDED AT HIS WORDS.
​ JESUS DIDN'T CALL THEM BACK SAYING, OK GUYS, HERE'S ANOTHER FREE MEAL, LET'S JUST SIT DOWN AND WORK THIS OUT, LET'S ALL JUST HOLD HANDS AND SING A SONG.

WHEN THE RICH YOUNG RULER REFUSED TO FOLLOW JESUS CLEAR COMMAND TO SELL EVERYTHING HE HAD, JESUS ALLOWED HIM TO LEAVE, AND DIDN'T COMPROMISE WITH HIM BY SAYING, WELL OK, JUST SELL HALF OF YOUR BELONGINGS THEN, I UNDERSTAND.
​
SEEING PROFESSING CHRISTIANS MISREPRESENT JESUS, MAKING HIM LOOK LIKE A FALSE god WHO APPROVES OF PEOPLE'S SINS AND REBELLION. A FALSE god WHO SERVES THEM THEIR EVERY WISH ON A SILVER PLATTER, AND IS WILLING TO COMPROMISE WITH THEM, IN ORDER THAT THEY MAY HAVE THEIR BEST LIVES NOW.
IF YOU'RE FOLLOWING THAT jesus, HIS REAL NAME IS satan.

Is there any other proof you need today
That Jesus is the
ONLY KING ..
​
THE ONLY LORD

"For whoever is ashamed of Me and My words in this adulterous and sinful generation, the Son of Man will also be ashamed of him when He comes in the glory of His Father with the holy angels

But false prophets also arose among the people, just as there will also be false teachers among you, who will secretly introduce destructive heresies, even denying the Master who bought them, bringing swift destruction upon themselves.

Know the True Christ
​
​
Not the False Christs 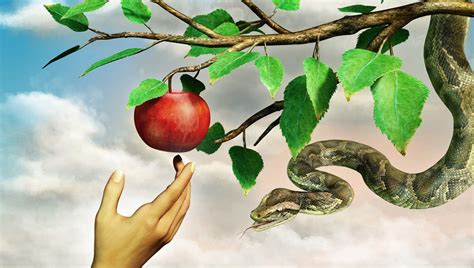 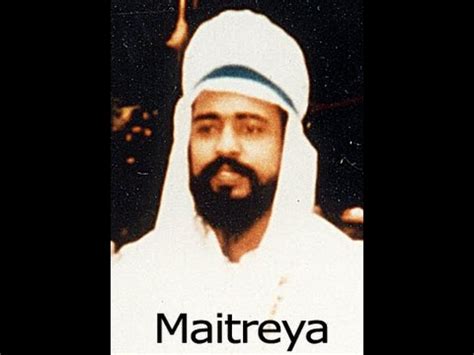 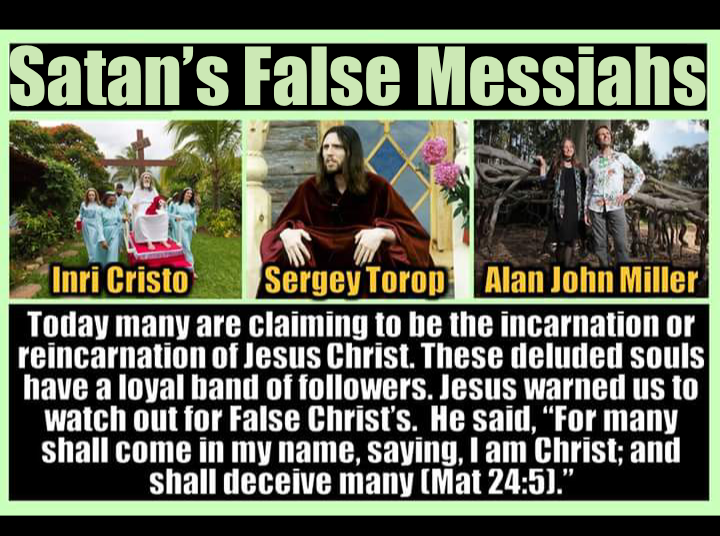 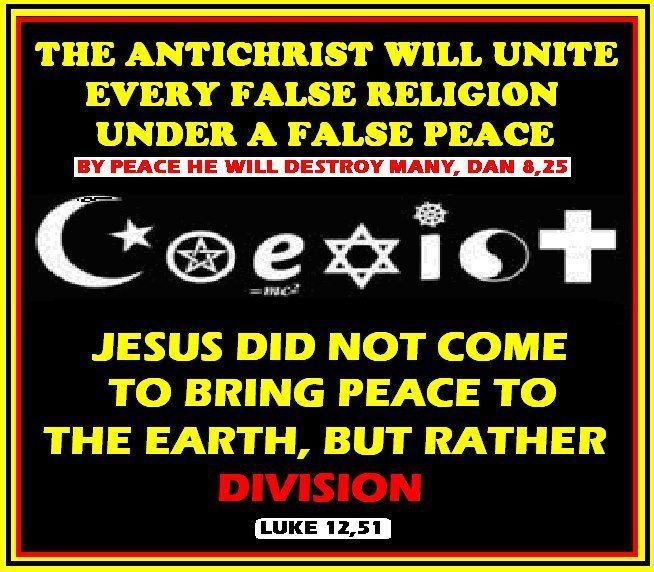 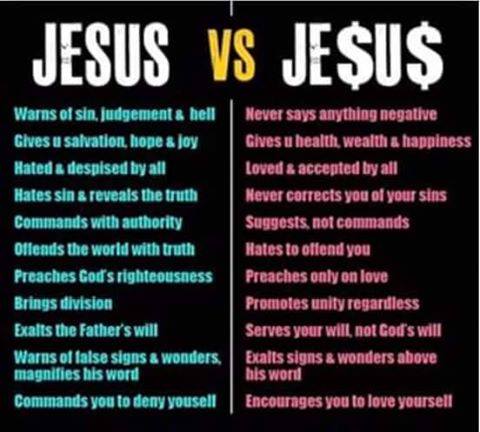 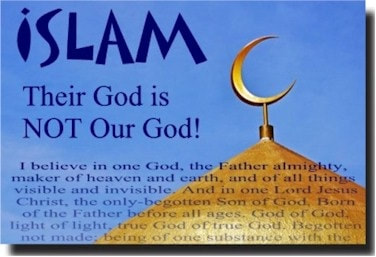 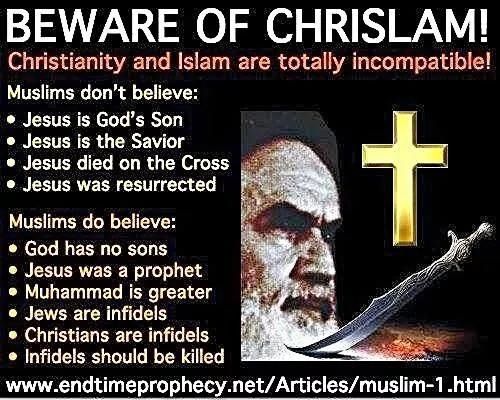 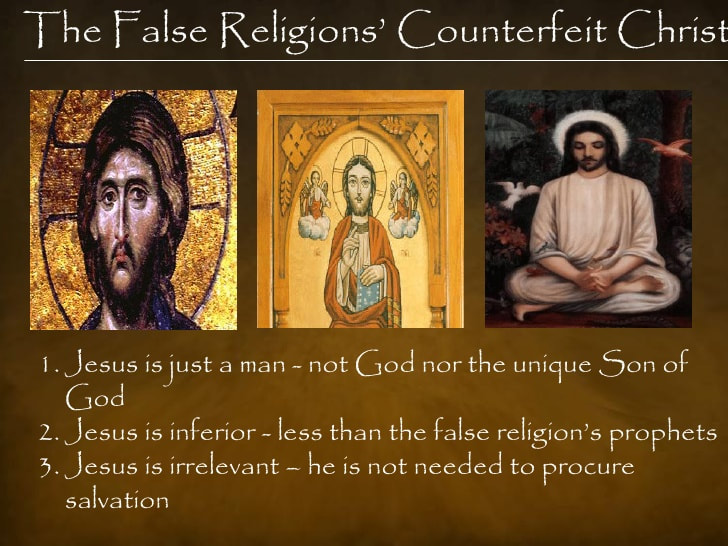 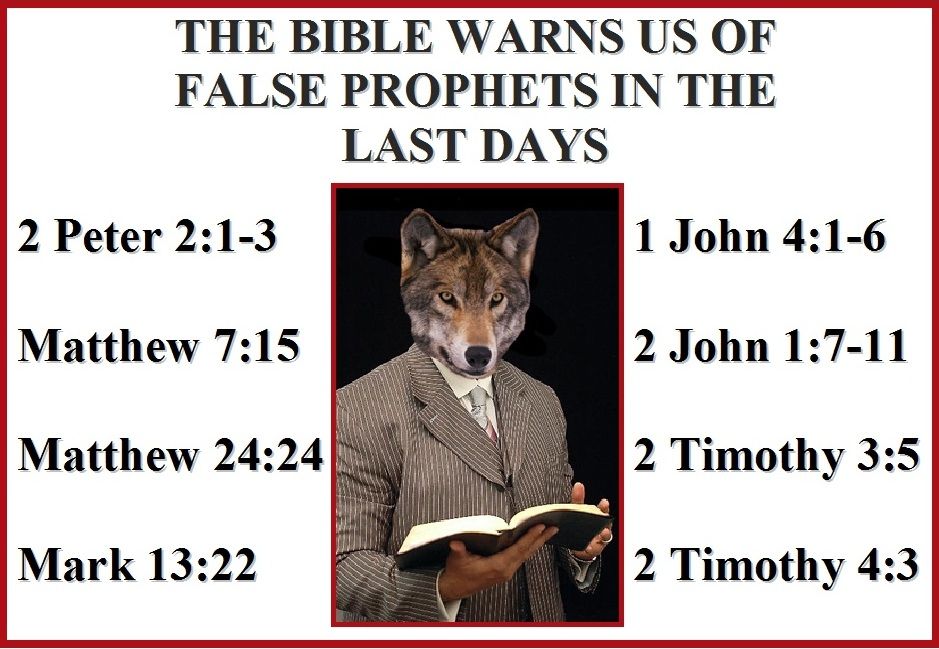 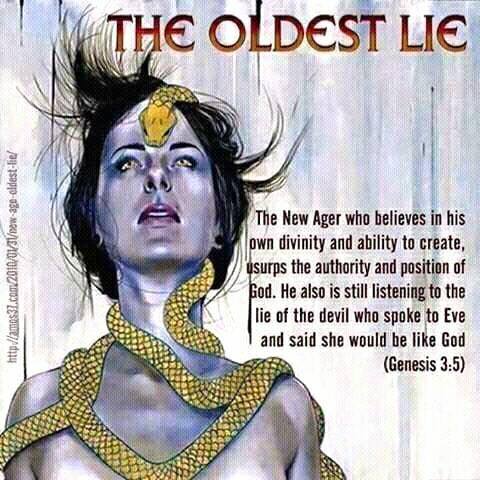 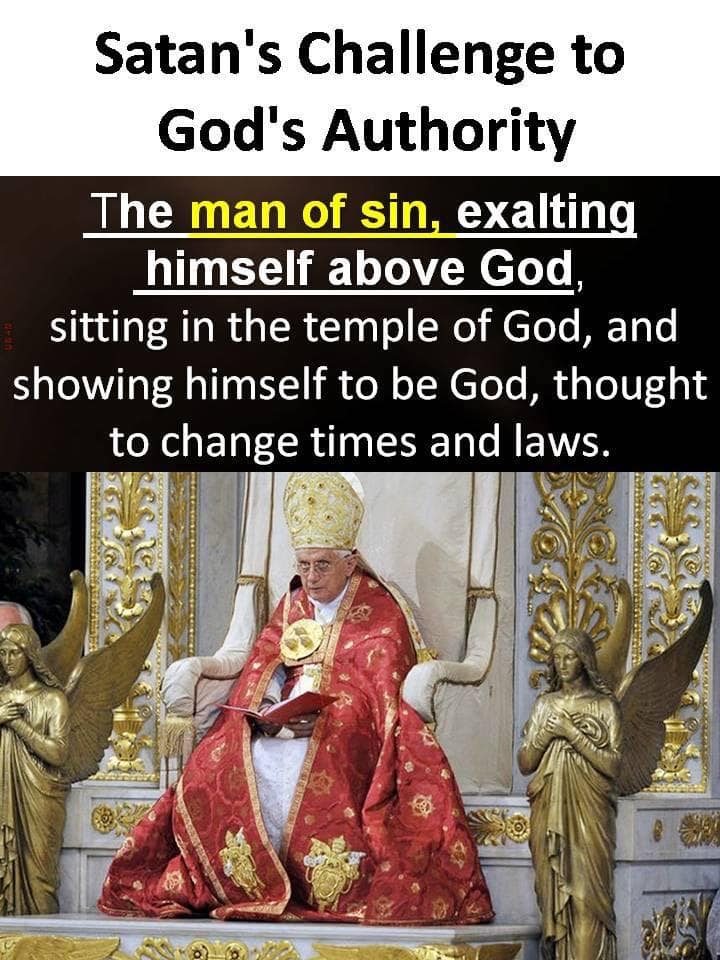 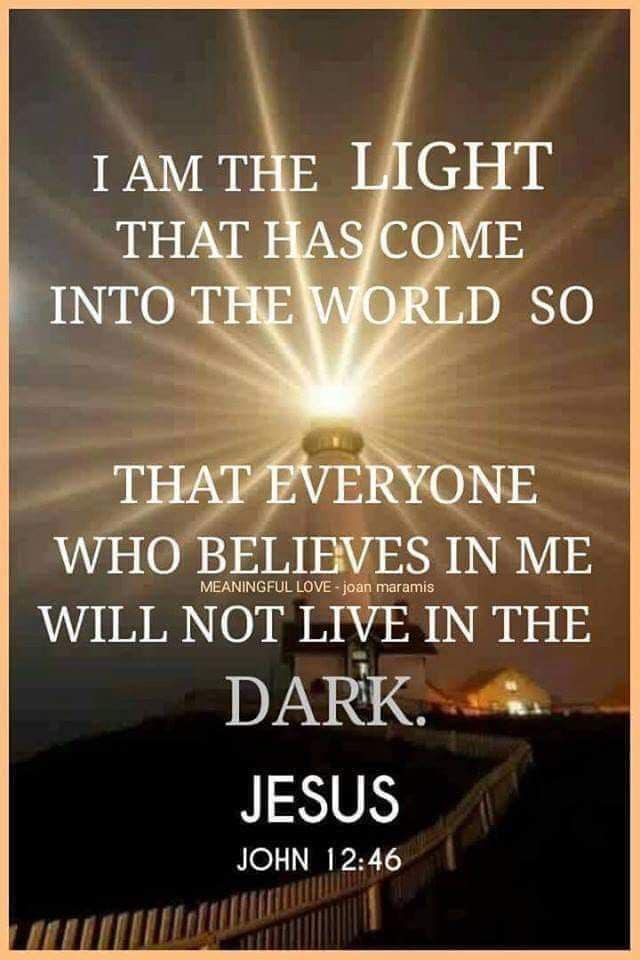