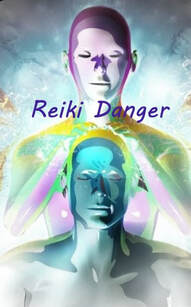 I no longer do Reiki. I was a Reiki practitioner. I was eager to learn and heal people .I thought I was giving a wonderful service , and wanted to heal people.I was on the cusp of coming out of the New Age movement. God was working through me to "wake me up"and I could see through the cracks of deception. It was a time I was questioning everything. Id read the dangers of Yoga and Meditation but certainly not Reiki?
​But its healing? How could it be bad ?
This is my story.


My Reiki teacher was also a friend. We were friends in New Age. I won't mention her true Identity but will just call her Anna. I pray for her a lot and Hope one day she will see the Truth in Jesus and He, and only He , has the power and Authority to heal.

Anna Had been doing Reiki for 30 plus years .She swore on Reiki and how it helped her over the years with her crippling disease of RSD-reflex sympathetic dystrophy syndrome or what Doctors now call Complex Regional Pain Syndrome. She said without doing Reiki she wouldn't  be alive.

At that time I didn't really know much about it. I became interested and asked If I could try it.
Anna gave me a session. I admit it was relaxing and enjoyed that.
​The room was warm and Anna had about 200 crystals throughout the room in all shapes and sizes. She also had quite of few crystal skulls which I never felt comfortable with. She placed the crystal on my chakras and they were positioned under the bed. Soft music played through out and there were pictures of Ascended New Age Masters on the walls. On other shelves were her Angels cards ,and all those sorts of things. She made the signs of symbols over me with her hands.

She explained the process as she went along.
Afterward she told me she was teaching it and offering certificate courses. She said it was a great way to work from home. I thought about it and I signed up to do it. I thought then that it was healing and it was good.

​I remember the "Attunement" process and thought it was so weird.This was like an initiation ritual into Reiki. It was all very serious .
Looking back now it was a ritual of strange hand signs and blowing on both sides of my face and these symbols above my head. I really didn't feel comfortable about having that done and in reality deep down  I knew it wasn't a good thing. Put it this way ...if you don't know or understand what someone is doing to you...then DO NOT do it. Learn more and research first !
​I had too many questions but I just went along with it all because she was a good friend and i had trust in her.
Anna Kept saying things like "After the attunement you can get headaches and feel a,little off for a few days and you need to integrate it all".      To me that just did not make any sense at all and it sounded very concerning and confusing.
In fact l questioned that ,and never felt satisfied with the answers given.  It just made me more confused.

Moving on , one day I asked Anna how she got her Complex Regional Pain syndrome as l could see her suffering and not being able to do the things anyone could do.
​She said that one time she was bush walking and climbing up a mountain .She said that 2 beings like angels appeared to her the night before the bushwalk .* Take note ....And the next day something had happened to her foot. lt became swollen , red ,sore and eventually it became worse and worse over the years. She later had problems with discs in her back and more and more things over time. Her health was degenerating and she was in poor condition.  Then  this condition set in causing her life to be extremely modified and often she was in intense pain.     Often she had to rest .....meaning lay down at various intervals throughout the day. Some days she wouldn't even leave the house for weeks and she couldn't drive anymore.
The symptoms cause nerve pain and damage. Often feeling like searing hot fire , and one cannot bear the pain of touch . I even witnessed Anna's body "jump"from big twitches that would jerk her body into twisted movements( Kyrias) It startled me so much l gasped.

I had heard her mention that during reiki sessions she would get wisdom from "beings "or " Angels" and sometimes they would appear to her as "light beings".     Often they would communicate to her what the client needed or that she should do this and that .  And she always did what she was guided to do. She had great trust in them....One time they gave her instructions to make essences ,to use like holistic medicines ,drops under the tongue.  She was selling these also.
I was intrigued and wanted to know more. I was curious and a little wary.
Anna was doing meditation contacting the ALIEN,ET  galactic beings ( which we know now are demons/the Fallen Angels)

One day at a later date, I asked her more about her disease as it was somewhat mysterious and how it just came about more or less overnight .
This time she mentioned that the "light beings' came to her the night before she climbed that mountain .There were 2 of them   .It occurred to me that maybe they had made this happen to her , and how can she not even think this herself.   Because l was waking up to deceptions and who certain beings were , I was adapt enough to know that all beings no matter how innocent they look can be Satan and his cohorts.

2 Corinthians 11:14
…13 For such men are false apostles, deceitful workers, masquerading as apostles of Christ. 14 And no wonder ,for even Satan masquerades as an Angel of light 15It is not surprising, then, if his servants masquerade as servants of righteousness.

I asked Anna more about when the"light beings ' first appeared to her and she stated that they came
the night before she climbed the mountain.
Which means the day before all her problems began.
She told me after probing her some more ,that she said they had come to warn her she felt.   At least that is what she felt about all of it.( But to me it was clear they were the cause of her condition).Anna attended conferences and connected with other persons who work with other beings and one of those beings is PAN.( RED FLAG)
This is truly frightening!!!! Either some people don't know who PAN is or they just accept it????

Often she would see these beings during meditations and they would give her messages.  She had mentioned also that she had out of body experiences sometimes.
I really began to put 2 and 2 together when she told me she gave her dog reiki. She said the dog seemed to like it.
But after time the dog became very sick also. The dog had severe allergies , and had to have special organic prepared foods and not other foods.
The dogs hair began to fall out ,and she was madly scratching all the time and she mentioned the dog was often in pain and extremely unsettled. The dog had skin blisters /sores on its body.
Anna  spent endless amounts of money at the vets with creams , tablets, vaccinations or cortisone injections for the dog and the more she did reiki it seemed the dog got sicker and sicker.

I said to Anna very gently in a conversation that I thought perhaps these light beings were not what she thought they were, and quoted the biblical verse about satan appearing as an angel of light and that maybe she was deceived.

A person has to ask themselves......I mean surely after 30 years of Reiki healing if a person is very sick to the point of not being able to walk some days .......surely if reiki was "healing"and so good,.......then why is she so sick with failing health problems??

Anna was not even open to exploring that maybe I had a valid point. I stopped having any involvement with Reiki completely because I saw through the cracks and what I saw was very dangerous .

Who were the practitioners channeling the energy from?
Plucking so called life force energy from the ethers. ?

Did you know that satan is the Prince of the power of the air ( residing in the ethers)-the spirit that is now in the sons of disobedience ?
Ephesians 2: 1-2

Why would some people feel very ill with headaches and dizziness the next few days.
I put this link here from a google website ,as an explanation from a practitioner. It does not seem right .
https://reikirays.com/15145/attunement-triggers-healing-crisis/

Our relationship was filled with tension after my questioning in the hope that she would consider my research and look into it deeper and see for herself .
She became distant  and not long after that she had ended the friendship on social media and did not return calls. I often wonder if those false angels( demons) were telling her bad things about me because i was showing her the truth. This happens often believe me. You become a threat to them.
​
When you become aware of the truth and the lies and deception of Satan and the ways he tricks people ,.....you want to make others aware too. This is the hardest part because people can be so blinded by the lie ,that they cannot see the truth.
There is no healing in any other healing , accept healing authorized BY Jesus and the power of His word.
​
Jesus is the greatest healer .
Only Jesus has the Power and Authority to Heal if its GODS will.
And I proclaimed this.
Obviously I wanted to her to see the truth and the possibility for her to be well again.


Pray for her and many others like Anna.
​God Bless

COMMENTS RECEIVED
From David  January 2021
​
Thanks for this testimony. I'm very aware of fallen angels (aka aliens) and demonic influences. I wasn't aware of the potential dangers of Reiki. Your testimony has been very educational for me.