SIN
HOW IT AFFECTS US

Adam Before and After the Fall          Written by Pastor A.W. Weckeman


Prior to the “Fall”, Adam who is referred to as “the son of God” (Luke 3:38), living in a state of innocence, enjoying intimate fellowship with God (Gen.3:8).
He had dominion over all of God’s creation (Ps. 8:5-6). Adam was in union with God through the faculties of his spirit which enabled him to commune with his Creator.
The light of the Holy Spirit was passing through Adam’s spirit unimpeded, reaching into his soul and influencing his mind and will, directing his body.
Before the fall Adam was in harmony with his Creator, his heart and mind were enlightened by the power of God.
​ This is not to say that Adam was a robot controlled by God but a spiritually-minded being with free will, to whom all things were possible. There was only one limitation placed upon Adam: 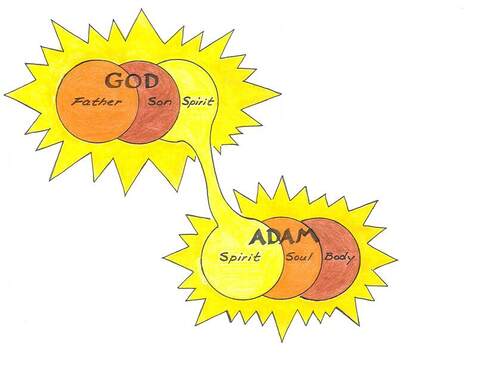 “And the LORD God commanded the man, saying, Of every tree of the garden thou mayest freely eat: But of the tree of the knowledge of good and evil, thou shalt not eat of it: for in the day that thou eatest thereof thou shalt surely die.” (Gen. 2:16-17).
Notice “in that day…thou shalt surely die”. Adam & Eve didn’t die “physically” at that moment; they died a spiritual death.

Adam’s Condition after the Fall

When Adam and Eve exercised their God-given free will to disobey, a crucial change occurred.
A split second after the creature chose to defy his Creator an inward fatality occurred.
Adam and Eve’s spiritual union with God was the first casualty of their disobedience; the departure of the Holy Spirit from their spirit rendered them spiritually dead, separated from God.


This does not infer that “man’s individual spirit” died at that time. Upon the departure of the Holy Spirit, the garment of light loses its source (First illustration below left) and Adam and Eve immediately become aware of their nakedness. (Gen. 3:7).
Lost is the image and likeness of God in the sense that it is now marred and disfigured by sin…like a beautiful bird without its feathers.
Also, notice the soul is now joined to the body as depicted by the second illustration below right.
​
Sin broke the bond between Adam and his Creator…Adam is now a carnal being, a “natural man” (1 Cor. 2:14) with a “fleshly mind” (Col. 2:18, 21, Rom. 8:7). A creature of light now dwells in a body of darkness. 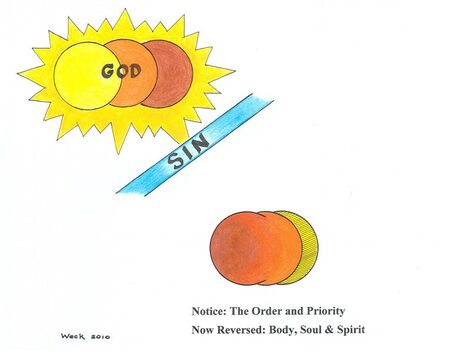 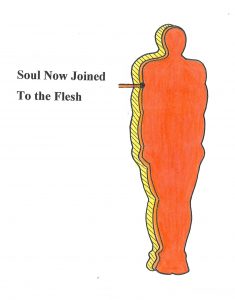 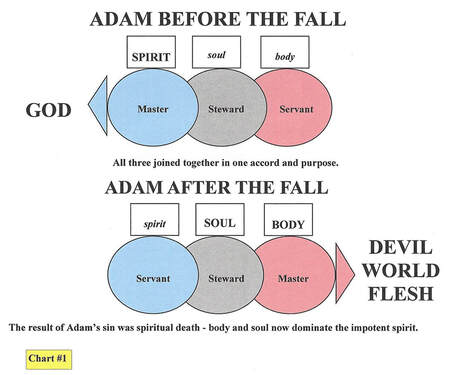 As we see from the above diagram, Adam’s sin has adversely affected his entire being, spirit, soul, and body.
Subsequently, the reordering of God’s divine design places the lowest part of man, the flesh in the dominant position, thereby providing a pathway, a natural susceptibility to sin.
Sin, previously unnatural, becomes natural. Temptation, is in part, triggered when external stimuli (ungodly influence) from the outside connects with something inherently corrupt on the inside “For I know that in me (that is, in my flesh), dwelleth no good thing…” (Rom. 7:18), setting off a lustful response.

As previously depicted, Adam’s body, now joined to his soul, also contributes to his vulnerabilities. The departure of the Holy Spirit from Adam & Eve’s spirit rendered them spiritually dead, separated from God.
As a direct result, the soul, severed from the spirit, joins to the body, which accounts for Old Testament  verses (before the second birth) where the soul and body are synonymous (Lev. 5:1-2 & 22:6, Gen.12:13, Ps.119:25).

Upon salvation, the Holy Spirit reunites with man’s spirit reversing the condition.
The flesh is then cut free from the soul by a spiritual operation called the “circumcision made without hands” (Col. 2:11-12), restoring the original order and priority.

So, “Adam, which was the son of God” (Luke 3:38), created to be the king over God’s creation is now spiritually dead, separated from God, and attached to an earthly body of corrupt and dying flesh.
Had not God, in His mercy, intervened by providing temporal atonement through the shed blood of animals, and future permanent atonement through the precious blood of “the Lamb of God”, Adam and all his descendants would have been eternally doomed.

The Nature of Adam’s relationship with God after the Fall

As we have seen, before the fall Adam was in a state of innocence…his spirit was joined to God’s Spirit, therefore fellowship with God was intimate and unobstructed. After Adam sinned all that changed…in a split second his spirit was severed from the Holy Spirit (Gen. 3:7).
From that point on Adam and Eve were separated from God. They no longer desired to walk with God and hid from Him (Gen. 3:8). This act of disobedience ended what is referred to as the “Dispensation of Innocence” and began the “Dispensation of Conscience”

The LORD then demonstrated His mercy and love for Adam and Eve by shedding the blood of innocent animals to cover their sin and nakedness. (Gen.3:21). After the fall God established a substitutionary system; temporary atonement, (Gen. 4:3-4) enabling His fallen creation to have conditional fellowship with Him.
During this probationary dispensation, the Spirit of God spoke directly to man’s conscience,
.once again providing an opportunity for obedience…man could be right with God if he so desired.
( NOTE- we know when we sin and do something wrong it is seered within our conscience,and we can literally feel it in our spirit it is wrong)

It wasn’t long before man manifested his inherited sin nature when, “Cain rose up against Abel his brother, and slew him.” (Gen. 4:8).
Genesis 6:5 sums up the result of man’s opportunity to led by his conscience, “And God saw that the wickedness of man was great in the earth, and that every imagination of the thoughts of his heart was only evil continually. And it repented the LORD that he had made man on the earth, and it grieved him at his heart. And the LORD said, I will destroy man whom I have created from the face of the earth…” (Gen. 6:5-7).

In our unregenerate state, blindness to the inner workings of sin in the flesh was natural…however, now that we are saved, ignorance concerning the inner struggle is no longer normal, nor is it acceptable to the Lord. Every child of God is obligated to, “…put off concerning the former conversation [manner of living] the old man, which is corrupt according to the deceitful lusts; And be renewed in the spirit of your mind; And that ye put on the new man, which after God is created in righteousness and true holiness.” (Eph. 4:22-24) [Emphasis mine].

Learning doctrinal truth is like building a structure…if the foundation is off, the whole building will be off. Sound doctrine begins with a sound interpretation of the fundamentals…only then can we follow God’s order and sequence, “For precept must be upon precept, precept upon precept: line upon line, line upon line; here a little, and there a little…” (Isa. 28:10).
Restoration Through Salvation

Now that we have explored the fundamental truths regarding the total effects of the fall, spirit, soul, and body we can proceed to analyze the details of salvation concerning the same.

A complete understanding of salvation and the resulting reversal of the effects of Adam’s sin, spirit, soul and body (made possible by the death, burial, and resurrection of the “last Adam” Jesus Christ) will provide crucial insight; revealing the essential truths necessary to overcome our enemies and “walk in newness of life.”

Ignorance or neglect regarding the life-changing doctrines associated with spiritual regeneration is a major component contributing to carnality within the Body of Christ, past, and present.
Copyright © 2021 All Rights Reserved-new2christ.com.au